The Cobb Douglas Production Function is widely used in economic models. It takes the following form:

The main characteristics of the Cobb-Douglas production function are:

- The marginal product is positive and decreasing.
- Output elasticity is constant, equal to α for L or β for K.
- Return to scale are α+β

This example is as follows:

The plot of this example is: 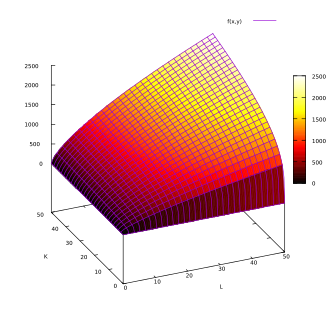 2- Example of a Linear Production Function

This is the simplest example. In this example, the output is in a direct linear relationship with the quantity of a single input. For example, if each robot can produce 100 T-Shirts per hour, and there are no other inputs, the production function will be:

The plot of this example is: 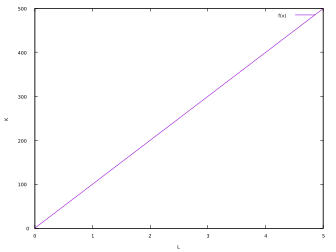 In this example we will see the case of a production function that has only one factor of production: robots: But if we keep adding robots, the output of each robot will decrease. Maybe because the robots start to chat with each other and it's productivity decreases

In this example, the production function is:

Where in the linear example, two robots would have produced 200 T-Shirts

The charts of both examples is:

We can see that as we keep adding robots, the difference in the quantity produced between the diminishing returns example and the linear example keeps growing.

In the Perfect Substitutes Production Function, one input can be substituted for another without any effect in the quantity produced.

If we increase L by 10 and at the same time, we decrease K by 10, the output will be the same. 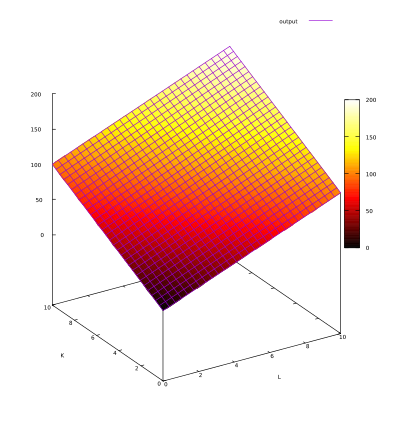