The GPD (Gross Domestic Product) is perhaps the most used measurement of the size of a country's economy. Definition: GPD is the monetary value of all the goods and services produced within the borders of a country during a specific time period.

Breaking Down the GPD

Product means the value of final goods and services. It can also be seen as the added value by each production stage or the sum of the rents to the production factors.

The GDP Growth Rate is the percentage increase in GDP from period to period. The period can be a quarter, a month, a year, etc.

When GDP grows, it is considered that the economy is working properly. Employment grows and there are more goods and services available.

The GPD can tell us a lot about the size of an economy as a whole. But countries with a lot of population, like China, will naturally have a larger GPD when compared with smaller countries, but with a higher output per person.

In order to compare the output per capita between countries, the GDP per Capita is used. To calculate the GDP per capita, the GPD is divided by the number of residents in a country.

If a country has a larger GDP than another country, it is considered that the economy of the country with the larger GPD is “bigger”. Small countries, like Japan and South Korea, can have a large GDP. On the contrary, big countries, like Kazajstán, can have a small GDP.

The top 10 countries by GDP (by purchasing power parity) are: 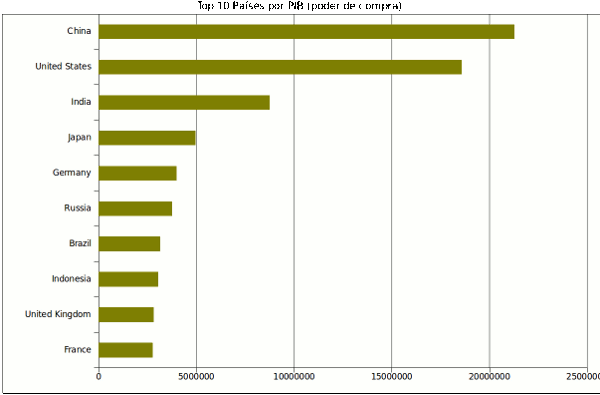 How is GDP Calculated?

Consumption is the expenditure done by the private sector that is not investment nor imports.

Investment is the expenditure in capital goods done by business, families and private individuals.

In most of the developed countries, consumption represents the larger part of the GDP. It is usually between 55% and 70%.

Investment is usually between 15% and 22%. In China and India, investment has a larger share (47% and 34%), because the GDP of these countries is growing fast.